You are here: Home / attention / Why conspiracty theorists love to theorize about conspiracies 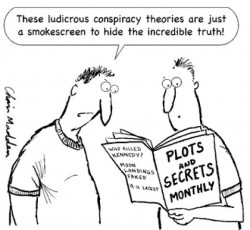 Yesterday morning I promoted (via the Elephant Journal Facebook page) Harris Mercer’s article ‘Why it’s wrong to doubt the news about Osama’. In case you haven’t read it, it’s an opinion piece.
Within minutes of the post the FB page received dozens of angry comments.
I realized two things: not only do conspiracy theorists love to theorize about conspiracies (which was the provocative title of my facebook post), but they don’t like to be called out on it…
I’ve thought a lot about this before, because I have a friend who loves to think (fantasize?) about this stuff. He spent many, many hours ‘researching’ over the Internet, and is firmly convinced that the world will end in 2012. He has invested not only a lot of time, but also a lot of money, into what he sees as precautionary measures to ensure his survival thereafter.
This is the conclusion I have reached:

It’s just another kind of addiction…

…up there along with shopping, pornography, video games, alcohol, drugs, cigarettes, etc. Most people are addicted to something. We like to fuel our addictions to distract ourselves from the real issues that would otherwise (we fear) burn a hole in our mind – why am I not deeply happy? Why do I not do what I love? Why do I not relish this life, and live the life of my dreams?
For the record, I personally believe that there was something a bit ‘fishy’ about 9/11. I also believe that Osama probably isn’t dead! The greatest intelligence asset in the world, ever? Shoot him in the eye!
But hey, I don’t want to fuel any more conspiracy theories because I don’t want you to waste (too much) of your precious time thinking about them.
What I’d really like you to do is address the deeper questions. Are you deeply happy? Do you feel successful? Are you living the life you dreamt of when you were a child?

It’s not important whether Osama planned 9/11; it’s not important whether he lived in a cave in Bora Bora or a mansion in Pakistan; it’s not important whether he’s alive or dead. It’s not important, compared to the simple question “Am I happy?”
You see, the world is full of unhappy people who pretend to be happy whilst pulling on their cigarettes; or plugging into the ‘net to research conspiracy theories; or going out at the weekend to get drunk, trying to forget about Monday looming up ahead, and the job that they dread.
So forget about Osama. If he’s not dead he soon will be, and we’ll never know the truth anyway.
Focus on yourself. “Be a light unto thyself”. You have the potential to be and do exactly what you would most love to be and do. When you get there, you’ll be a beacon of light in this dark world, and the more light we all bring, the more shadows we disperse.
Deep down we all want truth, justice, freedom, and peace. The only way is to find them within.