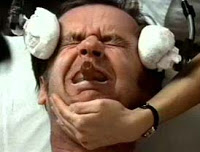 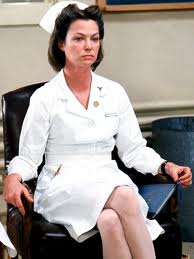 The thing that bothered me the most about this vocabulary restriction that my friend was under – it sounded so contrived. As if, at the moment when he wanted to exclaim “Oh my God, the house is on fire!” or “Good God, I’ve never seen such a large carrot”, or “God Almighty is that really the time?”, he had to check his surprise / indignation / relief, and redirect his feeling into another direction. It was the censorship of expression that I found hard to swallow…
Once, when I was sleeping over at Mark’s house I woke up having shat in the bed (I promise you, it never happened before or since). After I got over my fear of waking up Nurse Ratched and telling her the bad news, I stood in the hall and chuckled to myself as she changed the sheets. Somehow, it felt like divine retribution.
And I don’t imagine that she was saying to herself: “Oh my Gaw’, what a mess”…
In 1939 when Gone With the Wind was released, the famous line: “Frankly my dear, I don’t give a damn” almost didn’t make it past censorship. In those days, the words ‘hell’ and ‘damn’ were taboo. Hard to imagine that now isn’t it?
Nowadays there is really only one word left that universally causes us to pause and consider “can I really say that?”
Cunt.
A cunt is a vagina. We all know that, right? But a cunt is also a person so despicable that no other word/s will suffice to describe. In my recent article Why I Had To Leave Bangkok After Just One Night – The Girl With The Black Eyes I used the word ‘cunt’ to describe the various men who tried to ‘sell’ me an 11 year old child for the night. I personally would have preferred a nastier word, but I can’t think of one. (If you can, please let me know).
Several people commented that the story would have been better without the use of the word ‘cunt’.
Really, this is my reply to those people.
A word is primarily a sound. And it can of course have a meaning attached, but meaning is subjective. So one person who hears it will react in a different way to another…
And of course, the single syllable that is ‘Cunt’ can mean beautiful genitalia (your vaginas are all beautiful, girls, please realize that) or a despicable man. In the same way that a dick can be a phallus, or a fool!
So in a way, the two people who react differently to the same word are really only separated by their cultural exposure to the word itself (the more someone has heard it, the less they will react).
For example: Gone with the Wind did wonders, I’m sure, for the cultural acceptance of the word damn.
This article is doing wonders (I hope) for the word cunt (although perhaps not for my reputation. Oh well).
The meaning doesn’t change. Just the level of cultural acceptance.
So, when I am speaking or writing something, I won’t dampen my expression, my voice, to suit the audience. I just won’t do it. What would be the point – to protect delicate sensibilities? If so, should I worry about every word – god, damn, cunt…?! Where do I draw the line?
Rather, I challenge those of you who find this use of language offensive to question what part of you it is that is offended, and why?
…
If you remain offended after said questioning, then I apologize for causing pain. It certainly was not my intention. I promise you that I don’t often use the C word. (I save it for special occasions)…
Mark and I drifted apart. We were too different.
Last time I saw him was Christmas a few years ago. He came over with his fiancée, who I’d never met before. During dinner I went upstairs to find an old photo of the two of us at University. I wanted to show his wife-to-be how hilarious the two of us looked, both wearing wire-rimmed spectacles, with long hair and glowing red eyes. He intercepted me on my way back into the dining room, and insisted that I shouldn’t show her that photo.
Later, I figured out why. He had a joint in his hand, and he didn’t want her seeing that he’d ever smoked.
A couple of years later he and his (then wife) had a baby. I found out about it a week later from my Mum. That was when I realized that our friendship was dead and buried.
Censorship is not a Good Thing.
When my wife and I first moved into our hilltop home / retreat center amongst the farmland and forests of Eastern Slovenia, we left our T.V. behind.
We’d decided to simplify…
Our courtship was in an ashram, and the austerity of our lives there brought us face to face and heart to heart and soul to soul in ways that I had dreamt of, yet had not dared dream of.
Our courtship was unlike any other I had experienced – and I’d experienced many; mostly fast and furious, and without real substance. But meeting Petra was like tasting a fruit that I’d never heard of before; it was a totally new, fresh experience, that burst into my senses and spread through my body, mind, and spirit.
We spent 6 months getting to know each other the old fashioned way. Surrounded as we were by Swamis who had taken vows of renunciation (my intention on coming there was to become a Swami myself!) we couldn’t express our feelings for each other in a physical way; we couldn’t even hold hands there!
So we talked when we could, but mostly just ‘tuned in’ to each other’s energy, bathing in the electric awareness of loving presence that seemed to surround us whenever we happened to be in the same room.


Bonus video, Gil Scott Heron’s ‘The Revolution Will Not Be Televised’: