Hope you didn’t get too seasick watching it! I’ll try to keep future videos a little more ‘stable 🙂

Many thanks to the wonderful artist JellyVampire for this beautiful, inspiring, and uplifting artwork: 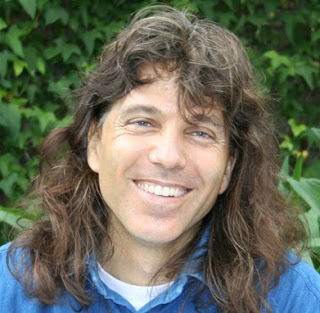 Some people talk of the world ending in 2012 – personally I think that’s nonsense. The world won’t end; but our world just might, unless we evolve human consciousness from the fear mentality that currently pervades, to a new paradigm of love.
I have always had this feeling, this vision (and it has not faded) since I was a child. Indeed, as I have grown older, it has been re-affirmed.
Swami Vishnu Devananda founded the Sivananda Yoga teacher-training course because he had a vision during meditation of the world burning; human beings running around in chaos and fear and desperation. He created that yoga teacher-training course not so much to train yoga teachers as to train world leaders. He recognized that moral, ethical, and spiritual leadership throughout society would prompt change at a ‘grassroots’ level: the change that is necessary to avoid the kind of disaster we may be facing now.
When I learnt of this – as I took the teacher-training myself – I was deeply moved. I silently vowed to do all I could to become the kind of leader that Swami Vishnu envisioned. I did this not only out of love for him (although I never met him – he died in 1993, the year I discovered yoga – I have always felt a tremendous loyalty and love towards him). I did it also because I resonated with his vision, and because I love this Earth, this home that we all share; upon which we float together through space, and towards our shared destiny.
So my work for many years now has been about making a difference. My work as a therapist, healer, and teacher; running yoga retreats and healing holidays; and indeed everything I write; all comes from a heartfelt urge to create a more positive human society.
Today, I begin to do something more.
Today I tell you about a spiritual teacher called Tony Samara… 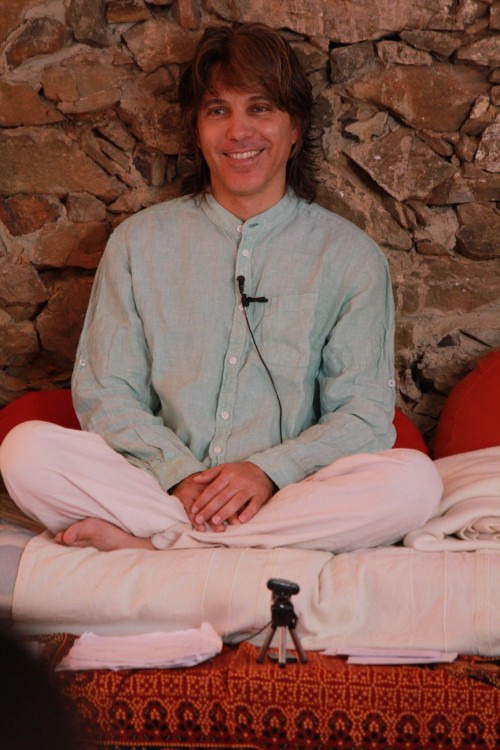 I call myself a spiritual teacher from time to time – I don’t mean, and have never meant to imply, that I am a guru, or that I am enlightened. Like many, I have tasted the bliss of self-realization but have not been able to sustain it.
Tony Samara is different. I have never met anyone like him, and believe me: I have searched; and I am not easily led.
He is endlessly patient, yet utterly intent.
He is simultaneously deeply compassionate and ruthlessly detached.
He is powerful – miracles seem to happen around him all the time – but his power is matched by a deep humility and gentleness.
I invite you to watch the following video. Made by those students closest to Tony, it is stunningly beautiful. However, the most beautiful aspect of it, for me, is simply Tony’s voice. I invite you to listen to his voice, feel his energy, and consider his words.
If you feel drawn to his teachings, know that there is no dogma or doctrine. He teaches a path of simplicity, and is himself a family man – he has four children.
You can find out more about him on this website, and tune in, for free, to his live Satsang at 17.00 UCT every wednesday. You may also view many of his previous Satsangs, and other videos, at the video archive accessed from the same page.
I will write more articles promoting Tony’s work: how I met him (and the amazing impact that simple moment had on me!); how other people met him; some of my personal experiences whilst being guided by him in meditation; how he has visited me (and others) in dreams.
For now, please enjoy this beautiful video!
With love, Ben

I was very lucky – when I learnt to meditate for the first time, I had a very good teacher.

Teaching, to me, is all about transmitting – in other words beyond what you say and what you do as a teacher, there is a sharing of the essence of what you teach. As a yoga instructor, when I run a class, I am of course giving verbal instructions, and correcting poses, but at the same time I am allowing the essence of yoga to flow through me. This is what I mean by transmission.

Well, my first meditation teacher did that very well.
It was in the Transcendental Meditation center in London. I had taken the basic course to learn to meditate, and on the last day, the culmination of the course was that the teacher guided me into a meditation. She sat with me for a while, and together we chanted the mantra that I had been given. Slowly, the chanting became quieter and quieter, until she left the room, leaving me for 20 minutes to continue repeating the mantra silently.

She had set up the whole thing very well – there was an air of sacredness; I felt completely relaxed; and my mind was totally focused.

For a few minutes I continued to repeat the mantra silently, allowing my body to relax more and more fully, feeling a greater level of concentration take over me. And then…

I heard the teacher returning, approaching the door to the room in which I sat. I suddenly realized that I had not had a single thought for at least the last 10 minutes. My mind had been completely silent. That thought – that I hadn’t been thinking – interrupted my state of silence, and with it came further reflection. I remembered what I had been experiencing in that silent state:

I was floating in space, weightless, and surrounded by the most beautiful stars.

The silence of my mind reflected a deep silent space around me – silent, but full. Full of the most wonderful depth, and infinite clarity.

I was bathing; body, mind, and soul, in the embrace of an unconditional love that knew no bounds.

I felt total and utter bliss – there is no other word.

As the door handle turned and my teacher came back into the room, I melted. Tears of gratitude streamed from my eyes as I felt completely transformed. Those minutes in that room has shown me that what I had been searching for – the experience of transcendence / self realization / enlightenment – was REAL. I was not chasing shadows. I was truly on to something.

My life since then has been a quest to re-attain that silent state more permanently.

Please note: the state of transcendent awareness does not have to imply detachment from the material world! On the contrary: when we are aware of our true nature, we are more capable; more able; more functional. The difference is that we no longer have to TRY to perform. We are automatically supremely skillful in that state. The words that come from our mouth are divine. Our actions reflect nothing but love. And our intentions are supremely benevolent. Because the reality is that our essence is of God. And when we transcend the mundane ‘little self’, and contact once again that ‘true Self’ that is at our heart, we know nothing, but are completely aware.

( This is the second article in what will be a long series on meditation. You can find the first HERE )

My Father was very fond of saying:

“there are two types of people in this world…”

Well, guess what?
There are two types of people in this world 🙂
People who think about the question “who am I?”, and people who avoid that thought at all costs. It’s the difference between thinking deeply, and trying not to. As Bertrand Russell said in one of my favorite quotes:

“Most people would sooner die than think. In fact, they do so!”

As I took my dog for his customary long walk over the hills and through the woods this morning, I came to the realization that I sometimes appear to be two different people:

What makes the difference between the two is very simple: if I get up in the morning and do what I call ‘my practice’ – which is meditation and yoga – , it’s going to be a superhero kind of a day, guaranteed; if I don’t, it’s going to be… an ordinary kind of day.

Why do I need to practice to feel great. Why can’t I maintain that level of energy, focus, and joy? I think the answer is this: we learn as children that we are SOMETHING. For example, I was told:

Before we are taught all this stuff, we don’t really have an IDEA of what we are. We just are, and we are happy just being. But then society does what society does – labeling everything – and we begin to accept our labels.
“Oh yes, I’m Ben, and I’m clever, but lazy.”
When I have a superhero day, I don’t feel like I am anything. I just am. And that SIMPLE BEING is really and truly wonderful. It’s also more real. Because I’m not imposing my ideas onto what I am. I just AM.
In the book “Holographic Universe” , Michael Talbot writes about Multiple Personality Disorder. It’s a fascinating read – he describes how some people actually have many, many people inside them (not just two like me!). Apparently, people with MPD can have different physical symptoms to match their different personalies. One man was stung on the eye by a bee. On the way to the doctor his personality switched. By the time he got to the doctor there was no bee sting. But then when he left, his personality switched back again and the bee sting came back! There are also examples of people having cancer in one personality, and the cancer is not present in another of their personalities!
Could it be that there is something in us that anchors our identity – something that holds our beliefs, ideas, and associations in place? Could it be that people with MPD somehow lack that anchor; or rather, that they have several anchors, so they switch randomly between various sets of beliefs, ideas and associations.
Perhaps when I do my practice each day, I temporarily suspend the presence of the anchor.
Perhaps one day I will finally learn to suspend it permanently.
Perhaps that is what enlightenment is…
What do you think? Who are you? Leave a comment, let me know!