You are here: Home / love / ‘Auschwitz Dancing’ video: love or fear… a choice we make, every moment. 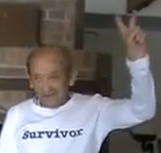 Do you believe in the possibility of peace on Earth?

***
This article was inspired by a video sent to me by a friend. That video is at the end of this piece, and if you haven’t already seen it, great! I ask you to read first, and watch later. Then, come back and leave a comment expressing what you felt about the video.

If you have seen the video, great! If you liked it, you’ll get what I have to say. If you didn’t – I ask you to read first, then watch the video again, and see if you still feel the same way…

***
I don’t only believe that it’s possible: I believe that it’s our purpose here, as human beings, to create peace. With our capacity for compassion, understanding, and intelligence we certainly have the potential to be the guardians of this beautiful Garden, our Mother, the Earth.
I think that that conviction is probably what caused my reaction to this video of Adolek Kohn, an 89-year-old Auschwitz survivor, dancing with his daughter and grandchildren at the concentration camps where almost all of his family were ‘exterminated’ 65 years ago. The first time I watched it I thought it was hilarious and uplifting. The second time, my wife and I both cried like babies.
Many people have, I think rather predictably, attacked the video. I don’t judge those people: on the contrary, I fully understand their reactions: we are conditioned to see things as being black and white; good and bad; yes and no, in this society. Why? Because our society is head-based. I’ve written about that in this article on ego, so I won’t go into it again here.
I don’t judge those people, because I know very well how hard it is to escape that conditioning, which tells us we must react in a certain way, to certain things. Like, for example: reacting with shock and horror and respect to the Holocaust, and Auschwitz, and death.
But you know what? That conditioning is what enables Holocausts to happen in the first place! It’s too easy to react to this video in the old, conditioned way… to say:
“Oh, Holocaust. We should be very respectful and quiet and somber…because, you know, that was BAD”
What good does that do? What good does a negative reaction EVER do?
Some people might say that being respectful, and somber, and quiet isn’t a bad or negative thing really. I would answer that we’ve been doing that for a long time, and still there are holocausts happening in the world.
I’ve never visited any of the concentration camps, but I’ve heard it said that there is no birdsong there. As if the weight and darkness of what happened silences any beautiful expression. It’s a somber, quiet, respect-filled place, and the energy of the holocaust remains.
Watching that video was a breath of fresh air. People laughing, dancing, singing, having fun, and enjoying life. I couldn’t help thinking: “Hitler must be turning in his grave”!
If he is turning in his grave, I bet the people who died in those camps are dancing for joy in theirs!
To transform the energy of hate, we have to let go of the energy that created it. Collectively.
As Einstein said: “you cannot solve a problem, by using the same consciousness that created it”.
In other words, being heavy, and dark, and somber isn’t going to change anything. It isn’t going to make the world a better place.
I believe that dancing, and celebration, and laughter will.
In any case, to the people who attack this video, I say this:
Adolek Kohn was there 65 years ago. He is still here.
If that dear old man, who went through what he did, wants to dance and laugh with his grandchildren in that place, I salute him. What courage it must have taken, to come full circle and return there without hate.
I consider it one of the greatest honors of my life to have seen him doing that, and I thank his family, from the bottom of my heart, for making this video: