You are here: Home / compassion / ARE YOU A SHEEP? Or are you being YOURSELF?! 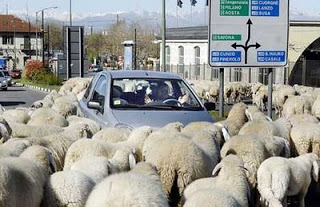 Don’t get me wrong – I love sheep. But not when they are pretending to be humans!!

It was brought to my attention again very recently how un-human many humans are! I came off my bike, and was lying by the side of the road, wondering if I had broken anything. It was here in the hills where I live, and there was no-one around to help me – until a car came along… and passed… the passenger, a metre away, looking through the window, pointing at me, and laughing!

I would say that “I couldn’t believe it”, but the fact is, I wasn’t all that surprised…. something very similar happened to me years ago in London – but that time I was in a busy street, surrounded by literally hundreds of people, and again, not a single person so much as asked if I was ok…

Why is it that people are so uncaring about each other?
I believe that there are many reasons – for example, sometimes people are really in a hurry, caught up in their problems, stressed. But I think that the main reason is that many people are afraid. Afraid of being seen – of being visible. Afraid of being heard. Afraid of what might happen in this unexpected, unusual, extra-ordinary encounter with a stranger. The fact is that many people have become like sheep. Fearful, and ready to do only what they are told.

At the Nuremberg trials, as we all know, the German officers and soldiers responsible for mass murder and genocide stated that they were simply
“following orders”.

I see that many people today are still perfectly happy to follow orders, even if those orders are apparently against what they believe in. For example, recently on French television, an experiment was carried out:
In the documentary, contestants thought they were in a ‘reality t.v. show’. They were told by the T.V. presenter (played by an actor) to electrocute someone for giving wrong answers. The person being ‘electrocuted’ was also an actor, but the ‘contestants’ didn’t know this. And guess what? They were prepared to follow these directions, even to the point where the person being electrocuted could be killed. Actually, this experiment was a replica of a famous scientific research conducted by Yale psychologist Stanley Milgram in the 1960s – in which the results were the same.

The times have changed, but human behaviour has not. To me, this shows the extent to which we allow others to take our power from us – if someone is in a position of apparent authority – whether they are a politician, a doctor, or a television presenter! – we are often all too happy to give our power to them.

But there is another side to this. We are not only prepared to follow orders. We are UNPREPARED to act on our own initiative. So many people are so brainwashed by television; advertising; and our education system ( which really educates people how not to think for themselves ) that they actually don’t know how to think for themselves. If they are not told what to do, they tend to do nothing. The great philosopher Bertrand Russell once said:
“Most people would rather die than think. In fact, they do so!”

Of course, we all go through the normal day to day activities, but anything out of the ordinary presents many people with a difficult challenge. So when they come across the unusual situation, for example, of a man at the side of the road underneath a bicycle, they simply point and laugh nervously! I wrote recently about FREEDOM, and how we are often unable to react spontaneously because we are so conditioned by our prejudices, fears, and ideas about the world around us. But I have realised that there is something else which limits people’s freedom in a more fundamental way: this inability to act without being encouraged; given permission; or even being ordered, to do so.

If you came across a person at the side of the road, under a bicycle, would you stop to help? If you were on a carefully organised t.v. show, with a charismatic and powerful presenter who gradually told you to increase the amount of electricity with which you were torturing another fellow contestant, would you?

Do you have your own voice, with which you are free and unafraid to share your thoughts, opinions, and feelings with other like-minded people? If the answer is YES to any or all of these questions then leave a comment, and let us all know!