You are here: Home / abuse / Why I left Bangkok… Part 2 – Blue Sapphires and Red Bull.
I’m sure Bangkok is a beautiful city. I’m sure there are lovely people there, and great things to do and see. I just didn’t do or see or meet any of them. (Click here for part one).
Instead I got on a train and headed North.
I stopped off in a town called Sukhothai. There’s a vast, ancient temple there.
I made friends with a young guy called Thum who worked in the place where I was staying. He was like a stallion. A lot of young Western girls passed through Sukhothai, and he felt obliged to sleep with all of them. He apparently had a strong sense of duty.
I hired a motorbike while I was there, and I’d drive around exploring temples and feeling free (I was 21 years old).
I noticed that all the trucks and lorries seemed to be in a hell of a hurry.
They would hurtle past me on my bike, missing my handlebars by – I swear – millimeters, the back of the truck shaking from side to side and huge clouds of dust kicking up in my face. I nearly died like this several times. Had I veered slightly to the right a moment before they passed I would have been finished…
When I mentioned this to Thum, he disappeared for a while and came back with a little brown medicinal-looking bottle. So I tasted ‘Red Bull’ for the first time (the taste was the same, but as for the ingredients, I don’t know…) back in 1994. Thum told me that it had amphetamines in it, and that the truck drivers all drank it to be able to drive longer and so make more money. I believed him. It gave an incredible energy kick.

(Year later, when I was a youth worker, I had a kid called Aaron in one of my programs. One night he had to be hospitalized after drinking 6 Red Bulls. He’d had a heart attack. He was 16 years old.)
There were two workmen hammering away on the roof of a small hut. I noticed that they’d hammer slowly and rhythmically for about 10 minutes, and then they’d climb down (slowly and rhythmically) and disappear inside for about 10 more minutes (before reappearing and staring their slow rhythm all over again). I mentioned my observation to Thum. He grinned his great big beautiful Thai smile, and led me into the hut they were working on. There was a man-size bong the in the middle of the room, and Thum sparked it up for me. He told me to take a hit. I took one hit, and then I went to my room and lay down.
I began to hear the most beautiful symphonic dance music. It was the coolest tune I’d ever heard, incredibly complex and uplifting. It was drum’n bass, several years before drum ‘n bass had even been invented. I wondered where the music was coming from, and got up a few times to try and find it. But every time I stood up, the music stopped. So I lay down and finally accepted that it was in my head. At first I was a little concerned. Then I relaxed and allowed the music to take me. Before falling asleep I wondered whether this new ability would last… it didn’t. I’ve not spontaneously composed symphonic drum ‘n bass since, and it’s probably a Good Thing.
There was a cool girl from Canada called Tina staying there (longer than she’d planned, until she met Thum), and she introduced me to PJ Harvey. Tina and I also went on a motorbike ride to a nature reserve. We hired a bike and I drove all the way there with her hanging on to my back. It was incredibly hot and dusty, and by the time we got there we didn’t have much time to swim in the waterfall. I swam and she watched (as I remember), and after I came out she took a photo of me and said it would be good for my portfolio (I was an aspiring actor).

On the way back it was getting dark, and the air was full of insects. Every few seconds I’d get shot in the face by a flying beetle, and it seriously hurt. Tina hid behind my shoulders and was more or less ok. It felt like an epic journey. I was the hero; no one but Tina could ever understand…
The next day I decided to head off to Chiang Mai.
Tina and Thum took me to the bus station and we said our goodbyes. I was feeling ill. By the time I got to Chiang Mai I had a fever. I felt very, very, sick. I found a place to stay in the suburbs that was a vast walled garden with bungalows. I stayed in one of the bungalows. It had a shower / toilet room, and I spent two days squatting in there with my two friends Projectile Vomit and Violent Diarrhea. When they’d had their fun with me, they threw me on the bed, and I lay there for another couple of days hallucinating feverishly. I was so weak I could barely move, and I remember thinking that if I died, no one would find me for a week.
When I got some strength back I hired a bike and drove into town.
I visited a temple. It was a cloudy day, and there was only one other person there – an old Thai man. When it started to rain I went into a doorway for shelter, and he joined me. It all seemed so natural.
We chatted, and he told me that he was a teacher. He had two hobbies: exploring the beautiful temples of South East Asia, and collecting stones. I didn’t know what kind of stones he meant exactly, but I wasn’t that interested either.
When the rain stopped, we started off on our separate ways. He turned to me and said:
“Would you like to join me for lunch? I will eat traditional Thai food and see some beautiful traditional Thai dancing…”
I clearly hadn’t learnt my lesson from the first similar-sounding invitation, so I said ‘yes’.
I followed his car, and after a while he pulled over and told me that he had a ‘chore’ to do on the way – he was buying some ‘stones’, and he had to go to the ‘warehouse’. Would I mind waiting for him a few minutes?
We pulled up outside what looked like a very expensive jewelry store on the outskirts of town.. The window was full of beautiful golden necklaces set with glittering precious stones, and the door was guarded by what looked like a Thai policeman. Still no alarm bells in my naïve young mind…
My new Thai friend disappeared inside the ‘store’ and reappeared a moment later with a tall, beautiful Thai woman in a short-skirted suit. I was stood there straddling my motor-bike feeling young and free and lucky.
He asked me if I would like a tour of the shop and warehouse (where apparently they ‘cut the stones’) while I waited for him. The tour would be with the ‘manageress’ – the beautiful Thai woman.
She looked a lot like this (but with a suit on): 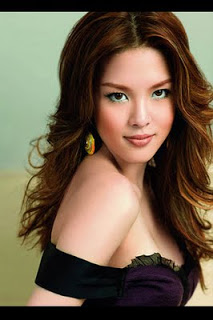 How could I say no?
So I had a tour, and the two of us ended up in the ‘office’. She sat on the edge of the desk, one leg crossed over the other at the knee. She had long legs, and her shirt was unbuttoned enough to show some cleavage, and I was 21 years old. My usual shyness around women (especially women I was very attracted to) somehow disappeared and I found myself flirting with her. She told me a long story about how Thailand is famous for it’s Sapphires. She also casually mentioned that the same Sapphires are worth 5 times as much in the West.
I started doing the math. But I wasn’t very good at it so I asked for a calculator…
Up until this point, there had been no indication that this whole situation was nothing other than a very fortunate co-incidence. I just happened to be looking around the same temple as a stone collector, who just happened to stand under the same doorway as me when it just happened to start raining. One thing led to another and now I just happened to be in the office of a famous Thai jewelry store falling in love with the most beautiful woman in the world, figuring out how I was going to become the wealthiest 21 year old in history.
It was my lucky day!
Then came the first ‘alarm bells’. The ‘Manageress’ asked me (ever so slightly impatiently) if I was going to buy some stones. Up until then, nothing had worried me about this situation.
I told her I’d think about it if she would let me take her out that evening.
Then came the second alarm bell. Her mouth said “yes” but her eyes looked very “no”.
However, despite these two clear warnings, the voice of my intuition was being drowned out by the much stronger voice of my simple, willful greed. If I were a cartoon character I would have had dollar signs flashing in my eyes.
So I asked my future wife her name and she told me
“Wâyt-sà-ya”, and we arranged a time later that evening when I would meet her at the store for our ‘date’, and I jumped on my bike and sped off to call my Mum and tell her the good news!
My Ma was not quick to share in my excitement. She suggested that I wait until I speak with my Father before doing anything foolish.
I decided to do some research. I visited another Jewelry store in the middle of town. It was in an old wooden building, and when I stepped inside a little bell rang. An old man came out of the back office. The moment I mentioned the name of the other Jewelry place (to this day I remember the name: ‘Doi Inthanon’) the old man froze. Then he looked out of the window, locked the door, and pulled me into the back office. His wife was there, and he quickly spoke to her in Thai. She gave me a harsh look:
“You no go Doi Inthanon. Doi Inthanon bad people”.
That was the message. I don’t remember the details of what she said, but I do remember very clearly that when I suggested that I go to the police, she said:
“Doi Inthanon police same same”.
That evening I turned up for my ‘date’. The ‘policeman’ was no longer there, but there was a young Thai guy, about the same age I was, looking fairly ‘bling’. When I arrived he hurried inside. Before I could follow him, he came back out.
“Wâyt-sà-ya is getting ready, I take you for drink”.
A moment later we were in a bar, and I bought us two beers. Mr Bling sat opposite me, and resolutely refused to look me in the eye. His eyes darted and shifted over my shoulder and towards the doorway every few seconds, and he was shaking. He was sweating.
I told him I was going to the toilet, and I left the bar. I got on my bike and got the hell out of there. I was shaking a little myself. I drove back to my walled garden bungalow, and was looking over my shoulder the whole way back.
Later, I found out that Wâyt-sà-ya means ‘whore’ in Thai…

Please leave a comment if you feel so inspired. I’m interested to know if you prefer my writing about my work – healing, therapy, personal development – to this personal anecdote stuff.
Oh, and if you enjoyed this, please share it – you can use the green ShareThis button below. Thank you!