You are here: Home / abundance / Mark Ruffalo Occupies Wall Street with passion, compassion, intelligence, charisma
I was an actor once. A terrible actor. I made audiences cringe. I myself cringed inwardly on stage. I had no confidence. I was in a play at the National Theatre once (just the once) and my parents got in the elevator with Neil Kinnock (head of the opposition party at the time). That’s my claim to acting fame. That’s how bad I was. Thank God I don’t have to act anymore; I found my real purpose in life.
Then there’s Mark Ruffalo. He’s a great actor. I could watch him all day. There’s an openness and an integrity about him that is very attractive. I’ve seen a few of his movies and I always felt like he’s the kind of guy I’d like to get to know. A good guy.
Then there’s Occupy (Wall Street). I love that movement. I put the brackets around the Wall Street part because I don’t feel it’s really about Wall Street any more. It’s about… no, wait.
Occupy has become a global movement and it’s only going to get bigger. It’s going to get bigger and bigger because more and more people are awakening to the simple truth of who they really are. More and more people are becoming conscious of their own innate power. We are not sheep. We are not here to be herded around like cattle, victims of a system that is based on greed and fear, so that 1% can prosper and be free while 99% live without dignity…
We are human beings: perfect, beautiful, powerful expressions of pure consciouness. We are free already, and as more and more people awaken to that simple truth by letting go of survival based fears, the system in which we live is changing. Occupy is a sign of that change – and I for one am overjoyed to see it happening.
So what’s Occupy about? I’ll let Mark Ruffalo explain it much better than I can:
And an equally intelligent, even more eloquent ‘call to arms’: 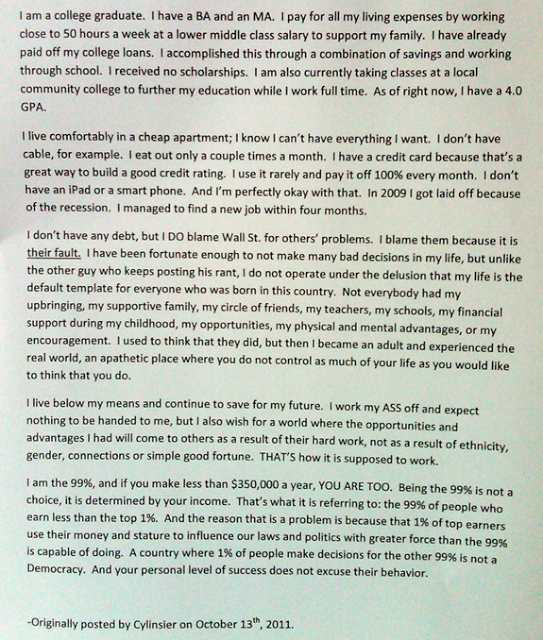